Is Phishing Covered by Cyber Insurance?

Debate over whether phishing covered by cyber insurance

In the United States, one company is currently embroiled in a dispute with their cyber insurer over whether phishing is covered by a cyber insurance policy taken out by the company to protect against computer fraud and cyberattacks.

Ameriforge Group Inc., took out cyber insurance with a subsidiary of Chubb Group. The policy, provided to AFGlobal Corp by Federal Insurance Co., was believed to cover computer fraud and funds transfer fraud. A claim was recently submitted to recover $480,000 after a member of staff from its accounting department fell for a spear phishing attack and made a $480,000 bank transfer to the account of the attacker. The insurance policy provided up to $3 million in cover, yet the claim was denied by the insurer on the grounds that the policy did not cover CEO fraud or business email compromise (BEC) as a result of phishing.

The business email compromise scam that the policy does not cover

The phishing scam in question is one that is being conducted with increasing frequency. The risk is so high that last year the FBI issued a warning about BEC attacks. These attacks are being conducted all too often on U.S. businesses.

In this case, the person to fall for the BEC phishing scam was AFGlobal Corp’s accounting director Glen Wurm. He received an email from his CEO requesting a bank transfer be made for $480,000. The email was written in a style which was typical of the communications sent from the CEO. This suggested the attacker was well aware of the relationship between the two individuals and had been monitoring email communications.

The phishing email is reported to have contained the following message: 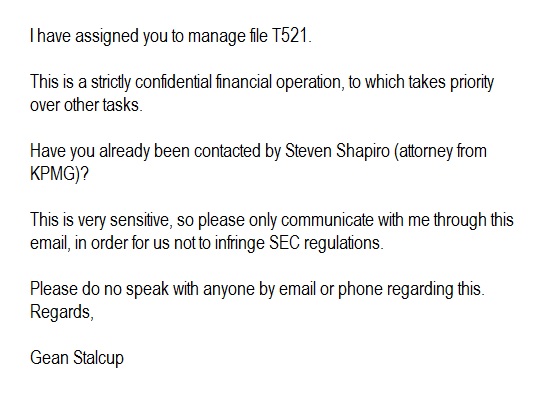 The email was followed up with a phone call from a person claiming to be Steven Shapiro, after which, wiring instructions were sent to allow the transfer of funds to an Agricultural Bank of China account. The money was transferred as requested and it was only when a follow up email was received a week later requesting a further transfer of $18 million that suspicions were raised. Of course, by that point the transferred funds had been withdrawn and the account had been closed.

Chubb Group maintains that this cyberattack is not covered by the insurance policy issued, as the incident falls outside the forgery coverage provided. The claim refers to forgery by a third party and that the email was a financial instrument. The issue in this case is whether the phishing email qualifies as a financial instrument. Chubb’s legal team claims it doesn’t.

In order to be a financial instrument, Chubb says:

For the claim to be paid, the financial instrument must have involved a written promise, order or direction to pay that is ‘similar’ to a “check” or “draft”. As it stands, Ameriforge Group will be required to cover the cost.

This is not the first time that Chubb Group has refused to pay a fraud claim, and Chubb Group is certainly not the only insurance company to refuse to pay out after a phishing attack. Companies are therefore advised to check whether phishing is covered by a cyber insurance policy, and also to find out the specific criteria that must be met in order for a successful claim to be made. It may be a wise precaution to obtain additional cover if the terms of the policy do not allow phishing fraud claims to be made.